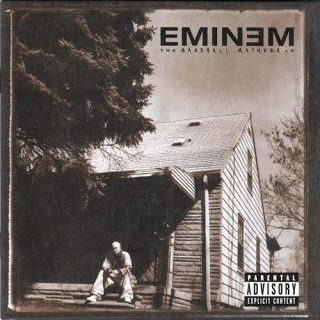 The Marshall Mathers LP is the third studio album by Eminem, released on May 23, 2000.

At the time of the album's release, Em was already on top of the world. His previous release, The Slim Shady LP, made him an overnight sensation and got as much attention from the media as he did from Moral Guardians who were practically having heart attacks at the idea of this guy possibly controlling the innocent youth through his rhymes.

Naturally, this album took all of the insanity of its predecessor and cranked it Up to Eleven, while mishmashing it with a personal and introspective account of Em coping with his newfound fame. Darker fantasies, more disturbing parts of his childhood, and more venomous responses to critics were all implemented on the album.

The album was released to even more critical and commercial success than SSLP, with critics hailing it to this day as one of the greatest and most important albums of all time, let alone in the hip-hop genre. It gave Em his second consecutive Grammy Award win for Best Rap Album as well as a nomination for Album of the Year. It also sold more than 1.76 million copies in America in the opening week, solidifying it as the fastest-selling studio album by any American solo artist in history. The album later went on to be certified Diamond in 2011 for selling 10 million copies in America, and it went on to sell a grand total of 32 million copies around the world (by 2012).

Keeping with tradition, the album garnered even more controversy than its predecessor with its Darker and Edgier approach to Em's life. Many people, including Dick Cheney's wife of all people, were up in arms about Em's lyrics. This caused a significant amount of protesting and debating, which only seemed to propel the album's fame further.

In 2013, Em would release a direct sequel to this album, called The Marshall Mathers LP 2 — though Eminem stated it wasn't a sequel, but "a revisitation", titled as it was to express "the nostalgia of the thing". Some critics suggest 2018's Kamikaze is a Spiritual Successor to The Marshall Mathers LP, with similar themes of fury, Eminem wrestling with his infamy, and insulting the popular music and critics of the day.

They ain't say I can't rap about TROPES no more!