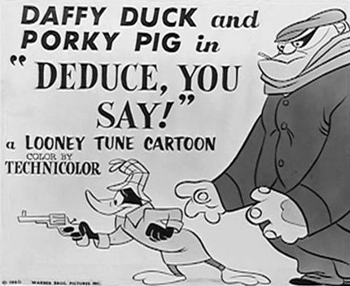 "Deduce, You Say" is a 1956 Looney Tunes short directed by Chuck Jones. Daffy Duck is Dorlock Holmes, with Porky Pig as sidekick Watkins, as they attempt to track down the notorious Shropshire Slasher.

"Deduce, You Say" provides examples of: