Western Animation / The Wearing of the Grin 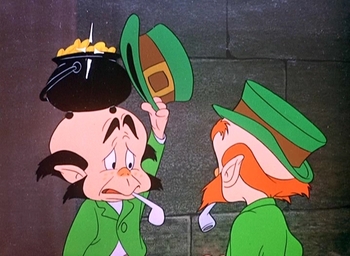 "The Wearing of the Grin" is a Looney Tunes cartoon directed by Chuck Jones and written by Michael Maltese.

One night, Porky Pig is driving his car through rural Ireland in the rain when he comes across an old castle on top of a hill, where he decides to spend the night. He sees a sign telling him to beware of Leprechauns, which he dismisses as nonsense.

He goes inside where he's met by Seamus O'Toole, the castle caretaker, who agrees to set him up for the night. Once inside, Porky is knocked out cold, where he soon learns that the leprechauns are much more real than he thought.

"The Wearing of the Grin" provides examples of: