Recap / Star Trek: The Next Generation S5E20 "Cost of Living" 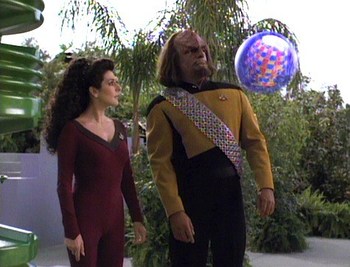 "What the heck are we looking at?"
Advertisement:

"Photon torpedoes armed! FIRE!" An asteroid is about to Colony Drop onto a nearby planet but, thanks to some judiciously Applied Phlebotinum, the Enterprise averts the disaster. Well done, everyone; off to the next mission! Only, on the way out of orbit, the ship picks up a bit of sparkly space dust.

Hey, look who's back! It's none other than Lwaxana Troi, Deanna's Plucky Comic Relief mother! And she has a big announcement: she's engaged! Lwaxana announces that she's engaged to a mysterious aristocrat named Campio. However, she's incredibly cagey about the details of her romance when pressed by Deanna. At any rate, she plans on marrying him right on the Enterprise once it picks him up. Upon hearing that he'll be about to "give away" Lwaxana (and finally be rid of her), Picard readily grants permission for the ceremony.

Mrs. Troi also strikes up an Intergenerational Friendship with Worf's son Alexander, who is having discipline problems and who, at Counselor Troi's suggestion, has entered into a "contract" with Worf to establish ground rules. Mrs. Troi sides with the boy on this issue, earning his trust but annoying everyone else in the process. For her part, Mrs. Troi seems to be deliberately trying to undermine their attempts to teach Alexander responsibility, but she sees it as teaching him to be a Blithe Spirit like herself and to enjoy life. To that end she takes him to a Holodeck representation of Parallax Colony, a whole camp of free spirits—except for one Comically Serious dude who spouts Ice Cream Koans in a ridiculously dire tone: "Remember... 'The higher, the fewer!'"

This gives Alexander an idea, and he runs up to a perpetually arguing couple (whom they had met a minute prior) and grinds their argument to a halt by interjecting said "conversation stopper"—an action which pleases Mrs. Troi. During a mudbath, she tells Alexander that each person has a host of little people inside their heads, telling you what you should do, and you should never be afraid to listen to them.

In the meantime, Mrs. Troi admits to Deanna that she hasn't even met the man she's about to marry. They've merely exchanged profiles on the 24th century equivalent of a dating app. Deanna is further aghast that her mother won't follow the Betazoid tradition of going nude at the ceremony. It isn't like Mrs. Troi to subvert her own wishes and inclinations in deference to what others might think, but Lwaxana insists that everything is fine... except for the mug of sausage she gets from the food replicator instead of tea.

The replicator malfunction, it turns out, is not just a random incident; systems all over the ship are beginning to fall apart. In the course of investigating, La Forge and Data are bathed in a slimy goo which is the waste product from unseen parasites (the sparkly dust) eating the nitrate out of the ship's systems. The good news is, the parasites only eat that specific metal. The bad news is, nitrate is in every one of the ship's systems, including the life support.

As the crew works on this problem, Mrs. Troi is having troubles with the truly hideous wedding dress Campio will have her wear. Alexander comes in to chat, and over the course of their visit, Lwaxana reveals the real reason she's so quick to marry. She may or may not still be under the sexual effects of Betazoid Phase, but one thing is certain: she is desperately lonely in her old age and has become desperate for companionship of any kind.

Campio arrives, and he instantly proves to be both a bore and a prude. Both he and his hyperprotective aide are completely unprepared for Lwaxana's free spirit. Mrs. Troi, in turn, is clearly unimpressed with this stuffed shirt and ducks out of her own wedding-plan-a-thon to have a playdate with Alexander. On their playdate, Alexander intuits Mrs. Troi's lack of enthusiasm for the upcoming nuptuals and repeats back her own lesson about everyone being a collection of different people. Mrs. Troi quickly shoots him down and then just as quickly apologizes, realizing that he is in fact entirely correct.

The Enterprise is still suffering systemic failures all over, including life support and engines. But they've found an Asteroid Thicket rich in metals, and Data manages to lure the sparkly dust parasites over to the asteroids and out of the ship—after which everything starts working again.

On to the wedding! Naturally, Mrs. Troi is late to her own wedding, but when she finally does arrive, we see why: She has arrived in the full buff. Deanna and Alexander especially are quite pleased by this, but Campio and his aide are horrified by the lack of decorum and flee.

And so the day is saved. Mrs. Troi has taught Alexander how to enjoy life, and Alexander has taught Mrs. Troi that there's never a time when you must stop enjoying life. Lwaxana, Deanna and Alexander celebrate with one final mudbath on Parallax Colony. Even Worf has joined then, sitting up to his chin in mud and grousing, "We just sit here?"

It takes over 30 seconds from Lwaxana Troi to react to hearing that Worf and his son Alexander are drafting a contract.

It takes over 30 seconds from Lwaxana Troi to react to hearing that Worf and his son Alexander are drafting a contract.