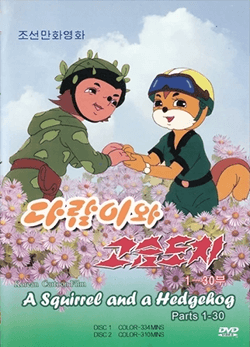 It is about the inhabitants of a place called Flower Hill, which is made up of squirrels, hedgehogs, and ducks. The squirrels are the leadership, the hedgehogs are the soldiers, and the ducks are the navy. There are plenty of other factions as well, such as friendly bears, while the antagonists are made up of weasels, rats and wolves.

For a cartoon program purportedly made for children, it's filled with graphic violence and doesn't shy away from depicting the horrors of war including death. It reeks of anti-American propaganda from every hole. The Daily Dot sums its tone compared to other animated series up as

"imagine Breaking Bad as a cartoon."

Very surprisingly, it has an English dub

made by Mondo TV with the title changed to Brave Soldiers. Even more surprisingly, the voice cast has a pair of recognizable names; DAN GREEN is the narrator, and Mike Pollock is Sensorso Bear. note It should be noted, however, that way before the Brave Soldiers English dub was made, Mondo TV has previously worked with the North Korean SEK Studio (the animation company behind Squirrel and Hedgehog) on other Italian produced ventures before, most notably The Legend of the Titanic, its sequel Tentacolino, and the animated TV series Simba the King Lion, so Mondo's ties with SEK go way deeper than just a mere English dub of Squirrel and Hedgehog.

Squirrel and Hedgehog provides examples of the following tropes: