Series / The Adventures of Slim Goodbody 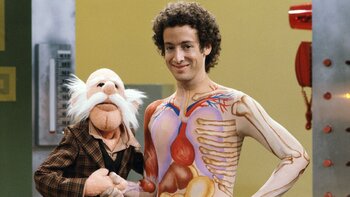 Slim Goodbody is a character created by and originally played by actor John Burstein. John wore a unitard that was painted with anatomically-correct internal organs, showing the lungs, heart, and digestive system, while even showing muscles on his arms and legs on his right and bones on his left.

He got his start in TV by starring in a segment on the popular Captain Kangaroo show, The Adventure of Slim Goodbody in Nutri City, along with a cast of characters that were mostly puppets. In his Nutri City series, Slim himself was a superhero who worked at Body Control, making sure that good nutrition and health prevailed in the city, foiling the plans of various villains who wanted to wreck these things.

It was better than it sounded.

It was so good, in fact, that after just a few years, PBS offered Slim his own TV show.