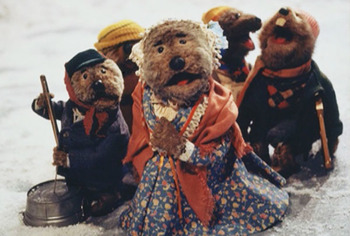 A Christmas story published in 1971 by Russell Hoban. It tells of a widowed otter and her son who are struggling to make ends meet: she takes in laundry and he does odd jobs around town. Both of them want to get the other something really special for Christmas — she wants to get him a guitar and he wants to get her a piano. But times are especially tough this year: adults are taking the jobs that Emmet used to get and people are doing their own laundry. Then the town announces a talent show with a $50 prize.

Emmet and Ma both enter without the other's knowledge. Emmet joins a jug band with his friends, even though it means drilling a hole in the bottom of Ma's washtub to turn it into a bass. Ma Otter decides to sing, and has to sell her son's tools to get a dress to wear. Their acts go well, and both seem to have a strong chance of winning, but the flashy River Bottom Band from two towns over sails in and steals the show.

With their hopes and livelihoods gone, Ma, Emmet and his friends head home. On the way, Ma stops to sing her song again with the jug band playing behind her, and the local innkeeper hears them and hires them as the house band.

In 1977, Jim Henson adapted the story (with puppets Muppets, of course) for CBC in Canada. It debuted in the U.S. in 1978 on the then-fledgling HBO and was very well received, winning a CableACE award, and remained a holiday staple on HBO for over a decade (its success making Fraggle Rock, also made in Canada with many of the same talent, possible a few years later), thereafter syndicated on ABC, Nickelodeon and Freeform. It sticks very true to the story. (The only real difference is that in the special, the Riverbottom Nightmare Band are a gang of mean-spirited bullies. In the book, they were just a band with a flashier, more glamorous act.) Original music was written by Paul Williams; despite positive reviews, a soundtrack was never officially released until November 2018 through Varese Sarabande.note "When the River Meets the Sea" is also notable for having been sung by Jerry Nelson (Emmet) and Louise Gold at Jim Henson's memorial service. In 2008–09, the Goodspeed Theater and The Jim Henson Company produced a live stage version of the show, featuring a mixture of Muppets and costumed humans.

A remake is currently in production for HBO

, with Flight of the Conchords' Bret McKenzie, songwriter for the recent Muppet films, taking the helm for the music and script and possibly directing.