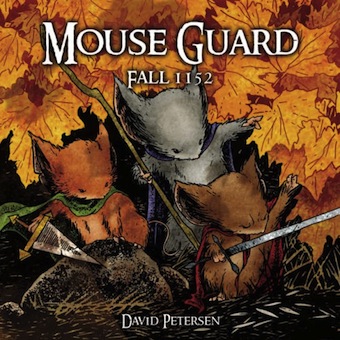 You know, like a nice game of Mouse and Cat.
"Let me tell ye about the Guard. We mice have little chance in this world, considering all the critters that eat us. We know how to build our cities hidden and protected; deep within rock outcroppings, in tangled root, and beneath loamy soil. We survive. But how do we live? Travel in the open between our towns is dangerous. The Guard has been in existence longer than our history. They are the trail blazers, the guides, the escorts, and defenders of us."
Advertisement:

Imagine a cross between Usagi Yojimbo and Redwall, add in some very lush illustrations, and you get Mouse Guard. This bi-monthly comic book by David Peterson is published by Archaia Entertainment and features talking mice in a medieval-type setting, where there are no humans, but plenty of predators.

The first mini-series, Mouse Guard: Fall 1152, starts off with three of the Mouse Guard, Saxon, Kenzie, and Lieam, setting out to find a grain merchant who disappeared. Meanwhile, a comrade called Sadie is told to check up on a Guard Mouse at a remote post who has not been in contact with his superiors for some time. While performing these seemingly unconnected missions, they come across something else, a plot even more deadly than they could imagine...and an oldfur named Celanawe, who might prove to be a lost, yet vital, part of the Guard's history.

The second mini-series, Mouse Guard: Winter 1152, deals with the fallout of the deadly plot in Fall. Saxon, Kenzie, Lieam, Sadie, and Celanawe have been sent to gather supplies from other mouse villages, as Lockhaven, the Guard's base, is woefully understocked. Things do not go according to plan, and they discover a dangerous secret that puts all the Mouse Territories in peril.

The third mini-series is Mouse Guard: The Black Axe. This prequel reveals the life of old Celanawe when he was a young Guard Mouse. An old mouse called Em of Appleloft has discovered Celanawe to be her only living relative, and her arrival at his solitary post sets him off on an adventure toward his destiny...

There is a series in the works, tentatively titled Mouse Guard: The Winter War, which will tell the story of a war with a weasel warlord that takes place two years before Fall 1152. Mouse Guard: Spring 1153 will pick up where Winter left off. There is also The Role-Playing Game, which uses a modified version of the Burning Wheel system and won the 2009 Origins award for Best Roleplaying Game.

On the sidelines, there is a mini-series called Legends of the Guard. It takes place in an inn, where the innkeeper holds a contest for the best storyteller, promising to clear the winner's tab. The stories are written and illustrated by David Peterson's friends and co-workers, and are mostly non-canon, but offer beautiful illustrations and a good insight into the fictional culture being created. And, of course, Peterson offers some gorgeous artwork of his own, along with snippets of some of his own legends.

The one shot Mouse Guard: The Owlhen Caregiver featured further stories from the world.

A feature film based on the series was in development for some time, with Wes Ball planning to direct the film and Sonoya Mizuno playing the lead. In June 2019, Ball confirmed the film cancelled, due to Disney shutting down production two weeks before filming and the producers being unable to find a new home for the project.

Not to be confused with The Mouse Watch.