Literature / The Weirdstone of Brisingamen 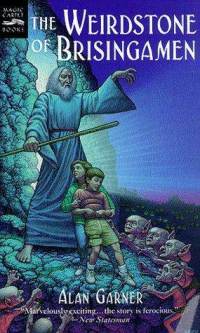 The Weirdstone of Brisingamen is a 1960 fantasy novel by Alan Garner. Published originally by Collins, whose head at the time was looking for more fantasy novels in order to cash in on the success of The Lord of the Rings,note  It isn't by accident that Cadellin looks suspiciously like Gandalf and the children are hobbit-sized in the cover art to the right/top (on mobile) The Weirdstone went on to critical and commercial success at the time and has remained popular ever since (though not so much with its author). There's even a musical adaptation made in the 70s, which was recently re-arranged by goth band Inkubus Sukkubus, though for copyright reasons their version is unlikely to ever see the light of day.

The story of Weirdstone draws heavily on the local folklore of Cheshire, specifically a folk tale called The Wizard Under The Hill which revolved around a wizard guarding a cave in which King Arthur and his knights slept. Garner also borrowed other elements from Norse and Celtic mythologies; the lios and svart-alfar, the Morrigan, Ragnarok and mixed them all together to create a story of his own.

Weirdstone starts out with a retelling of a local tale of the Wizard Under The Hill, who needed a white mare to complete his set of horses for the Sleepers. He buys one from a local farmer at the market, and in the process, the farmer is taken to Fundindelve, the Cave of The Sleepers. Being an avaricious man, he steals away the Weirdstone from the cave, compromising the spells that keep the Sleepers from aging and dying.

Centuries later, Susan and Colin, the child-protagonists, are sent to stay with grumpy farmer Gowther Mossock and during their explorations of nearby Alderly Edge, come to encounter the wizard, Cadellin Silverbrow, who is the guardian of the Cave of The Sleepers. Unbeknownst to either the children or the wizard, Susan's guardian Elizabeth Mossock is a direct descendant of the farmer whom Cadellin purchased the horse from; the stolen Weirdstone became a family heirloom, bequeathed to her, which Susan wears around her wrist in a bracelet. Cadellin fails to notice the bracelet, but its significance is not lost on the malevolent Selina Place and her Morthbrood, who seek to bring about the return of Nastrond, the Spirit of Darkness whom the Sleepers banished centuries ago and whose return they were enchanted to wait for. Continued in The Moon of Gomrath (1963), with a long-delayed conclusion, of sorts, to the trilogy in Boneland (2013).