Series / It's a Big Big World 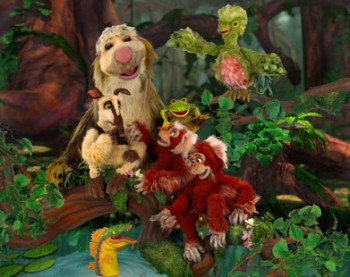 The show revolves around a group of animals living in "The World Tree" in the rainforest along the Amazon River with the Pico da Neblina mountain background. The main character and host is Snook the sloth.

The world goes spinning round and round, it's true
We've had our time and now we're through
But you and I forever will be friends
We’ll try to touch the sky where clouds never end
And we'll search for wonder all around
And you'll find me hanging upside down
And you and I together in a big, big world
We’ll try to touch the sky in a big, big world
You have to go, I know it's time
So give me five
This whole world is yours and mine