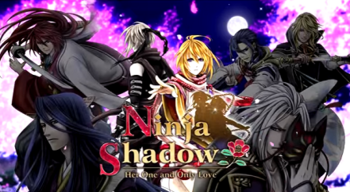 "Nagasaki shall know that its vigilantes bring justice!"
You secretly join an organization as a shadow of your brother. One of the senior ninjas become your instructor to support you. The feeling of trust eventually turns into something else that you start to see him more than just an instructor. Are you going to hide the secret or tell him the truth? The more you spend time with him, the more he grows on you... The new world of ninja awaits you!
— From the official site

The story begins in the Japan of the Isolation era, where the Nagasaki area

was the only part of the country open to foreigners. The city flourishes but it's also filled to the brim with corruption, as the merchants take over its power and oppress the people. As a result, a group of skilled male ninja have decided to take matters in their hands, using their leader's store as their headquarters to keep an eye on the abusive rich people and calling themselves the Nagasaki Vigilantes.

Kaname Shishido, a young ninja chieftain from the mountains near Nagasaki, is a potential recruit for the Vigilantes and must go to the city to properly join them... but in his way there, he's messily killed off when he stops by to help a village being burned down. His bodyguard and younger sister Saori survives the incident and swears revenge, but she cannot do it on her own. Fortunately, she was Kaname's twin sister and they look alike enough, so with a little work she can make herself pass as her dead big brother. Unfortunately, while the vigilante group takes her in with open arms without knowing about her gender... they all turn out to be very handsome guys, and Saori will have to choose her ninja instructor among them: the redhead Nice Guy Ukyo, the quiet Dark-Skinned Blond Eduard, the stand-offish Sexy Priest Asagi, The Leader Makoto, the eyepatch-wielding Kagura, etc. So not only she'll have to keep her female identity hidden, she'll have to sort her potential feelings towards one of her soon-to-be companions. Or maybe, just maybe, even find love outside the group... But at the same time, she must never forget her two biggest goals: to make sure that the Vigilantes will help her village, and to kill the man behind Kaname's murder.

Shall We Date?: Ninja Shadow provides examples of: