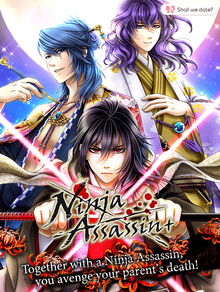 " Have you ever had a romance with a Ninja?"
Advertisement:

In the Edo period in Japan, there was a shadowy group of vigilante ninjas - they did anything, even murder, as long as they got paid.

One day, the well-respected police constable Takao and his wife are accused of a crime and murdered. Their teenage daughter Yui, the Player Character of the game, survives thanks to her mother's quick intervention; filled with sadness and anger, Yui sets out to avenge the deaths of her parents, and remembers there are assassins known as “the vigilantes". She tries to get in touch with them, but gets no replies.

As she is about to give up, one of the vigilantes appears in front of her and takes her to a tea house. After listening to her story, he suggests that she join them to take her revenge. After a moment’s thought, she takes him up on his offer.

Alongside the vigilante ninjas, she started her pursuit of justice.

Shall We Date?: Ninja Assassin provides examples of: