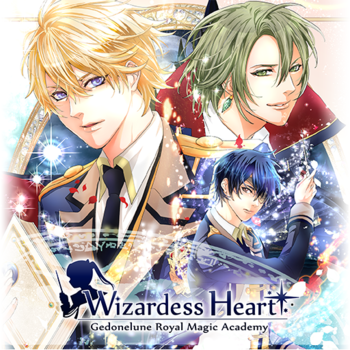 Shall We Date?: Wizardess Heart is a Romance Game Visual Novel for iOS and Android devices, part of NTT Solmare's Shall We Date? series.
Advertisement:

Liz Hart is a young orphan with a love of animals and a somewhat unreliable talent for magic. Though she dreams of becoming a skilled wizard and using magic to bring smiles to the faces of others, more often than not she can't manage to get even basic spells to work right. She's surprised and elated, therefore, when she receives an invitation to Gedonelune Royal Magic Academy, a prestigious Wizarding School with a long history.

When she arrives, however, she learns that her acceptance as a student at Gedonelune is only on a provisional basis. She has two weeks to prove that she has what it takes to be formally accepted as a full-time student - a daunting task for a girl who's had to teach herself everything she knows. She'll have to rise to the challenge to pass the test, discover the secrets of Gedonelune, and find love with one of her fellow students.

Shall We Date? Wizardess Heart includes examples of: