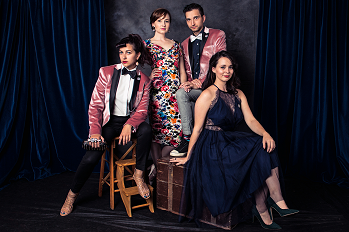 Shipwrecked Comedy is a a YouTube comedy group that creates web series, sketches, and short films. Originally founded in 2013 by Yulin Kuang and siblings Sean and Sinead Persaud, the group now consists of the Persauds, Mary Kate Wiles, and Sarah Grace Hart. The four of them share producing duties on and co-star in every project, which are usually co-written by Sean and Sinead.

Shipwrecked's most notable works revolve around their fictional version of author Edgar Allan Poe, which present Poe (portrayed by Sean Persaud) as a macabre and social awkward recluse sharing his house with Valley Girl ghost bride Lenore (Sinead Persaud) and pining after the Pollyanna Annabel Lee (Wiles). The characters were first introduced in the series A Tell Tale Vlog (also known as Social Awkward Poe), which was later spun off into Edgar Allan Poe's Murder Mystery Dinner Party, which later recieved its own companion in A Cryptmas Carol. In between they released the meta romance series Kissing in the Rain, and later works include the noir parody The Case of the Gilded Lily, the silent film homage American Whoopee, horror short Little VVomen, and a three-part Crossover Feud Episode with Tin Can Brothers that starts with Shipwrecked's short A Book By Its Cover.

Shipwrecked's work is usually based in well-known literature, history, or a combination of both, combining Genius Bonus with slapstick and dry humor.

Shipwrecked Comedy and their work contain examples of: