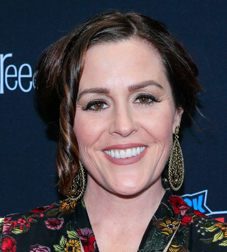 Rachael MacFarlane, a voice actress born on March 21, 1976 in Kent, Connecticut, is best known as the voice of Hayley Smith on American Dad!, as well doing voice work on shows such as Family Guy, The Batman, The Grim Adventures of Billy & Mandy, Samurai Jack, Dexter's Laboratory, The Powerpuff Girls, Johnny Bravo, Codename: Kids Next Door, Sofia the First, The Owl House and The Orville, and that's just the stuff you've heard of. She's also the sister of Seth MacFarlane.

a children's book with her husband Spencer Laudiero as the illustrator.