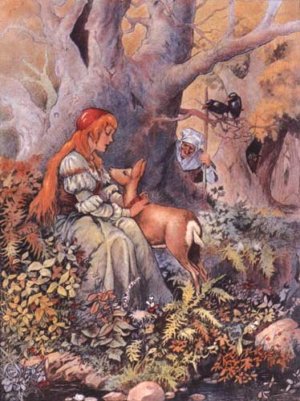 Illustration by John B. Gruelle (1914)
Advertisement:

", also known as "The Enchanted Stag", is a German fairy tale best known as told by The Brothers Grimm.

After their mother has died, two young siblings, a boy and a girl, are mistreated by their Wicked Stepmother, so much that they decide to run away from home. But the stepmother, who is also a witch, enchants the streams of the forest where the children are wandering, so that drinking from them would turn them into animals. The girl sees through the trap and talks her brother out of drinking from two streams that would have turned him into a tiger and a wolf, but when they come upon a stream that turns people into deer, he is so thirsty that he doesn't care any more, and turns into a roe fawn.

Later, the two find a deserted cottage in the woods and decide to live there, fending for themselves in the wilderness. Years have passed when a king and his court come to the forest for hunting, and the brother makes a game of making the hunters chase him, then hides in the cottage in the evening. But the second time he tries this, he is wounded, and thus leads the hunters to the cottage.

On seeing the sister, the king falls in love with her and asks her to marry him. She agrees to come to his castle, but only if the deer, her brother, can come too. Thus she is made queen, and the brother lives in the royal gardens. After a while, the sister has a child with the king. But by now, the evil stepmother has learned that the siblings are still alive, and, driven by hate and envy, plots to destroy their happiness...

This is one of the tales retold by Erstwhile. Compare "The Three Little Men in the Wood" and the Russian fairy tale "Sister Alyonushka and Brother Ivanushka".

"Brother and Sister" contains examples of the following tropes: