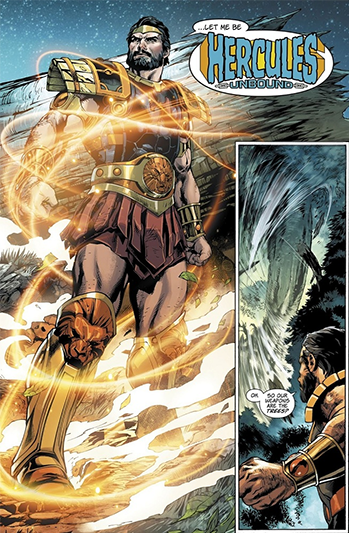 Hercules in DC Rebirth
DC Comics' version of the iconic demi-god son of Zeus from Classical Mythology. DC's Hercules was first put to paper by William Moulton Marston and Harry G. Peter and made his debut in the very first Wonder Woman story; "Introducing Wonder Woman", in All-Star Comics #8, published in 1941.
Advertisement:

In ancient times, Herakles and his men sought to secure Gaia's girdle from the Amazon Queen Hippolyta. After being allowed entrance to their city the brute drugged and enslaved the Amazons and raped the queen. While he left after stealing her girdle some of his men remained, only to be soundly defeated and killed to the last man when the Amazons recovered their strength. In doing so the Amazons broke a sacred oath made to the gods. The Amazons' brutality in securing their freedom infuriated their matron goddesses who forbade them from seeking vengeance on Hercules and set them the task and punishment of moving to the hidden island of Themyscira and guarding Doom's Doorway. The Amazons were split as a segment felt betrayed by their goddesses and chose to leave instead to seek vengeance, losing their immortality but not their strength and becoming the Amazons of Bana-Mighdall. After his demise and apotheosis, Hercules spent centuries imprisoned and bound beneath Themyscira for this transgression and it is source of constant enmity between the Amazons and the now immortal Hercules.

Over the centuries, Hercules has made attempts to become more noble, but his rash nature and love of violence make him a frequent thorn in Wonder Woman's side. His resentment of the Amazons after spending centuries bound beneath Themyscira as punishment without gaining their complete forgiveness has sabotaged his frequent tries for a more modern version of heroism, but he seems to have finally truly learned remorse for his less scrupulous actions of the past. He's gone by Heracles of Thebes, Mighty Hercules, Lion of Olympus, Champion/Harold Campion note when he planned to play the hero to endear himself to Wonder Woman and then attack her to get back at the Amazons, only to realize he actually liked her, Paul Bunyan/Paul Jackson, and Wonder Man.

For related characters see the Wonder Woman character sheets, especially the pages for her related gods and allies.

While he has used the title Wonder Man he's quite different from the character most commonly associated with the name; Marvel Comics' Wonder Man, nor is he to be confused with Wonder Man (Fox), or the Wonder-Man from 1963 that turned out to be a Superman Robot. If you were looking for Marvel's version of the demi-god he can be found at The Incredible Hercules.