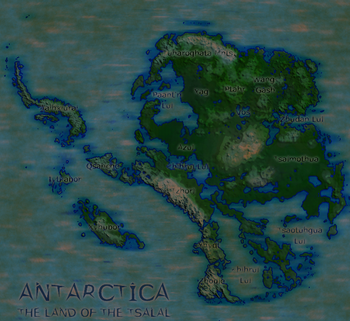 Welcome to Antarctica, land of the Tsalal.
"They are the utter opposite of everything we know as civilization, yet are not savage. Rather, they are like a black mirror unto ourselves. As industrious, as clever, as restless and dynamic. They have taken my ship apart like a child's puzzle, meditating over each component, striving to duplicate and better the production. I curse the day that the wandering spirit sent men to sail the seven days. ...in my heart, I feel fear, because now they know that we exist..."
Advertisement:
Captain James Cook, July 1774, sometime after castration

A Dark Fic Alternate History from AlternateHistory.com, written by its member D'Valdron. The story concerns a world that is to all appearances like ours, until Captain Cook discovers an enormous, technically sophisticated civilization in Antarctica that has been developing on its own, quite unaware of the rest of humanity. The people there are not friendly. The timeline starts with the colonization of a more livable Antarctica by a small group of swept-away prehistoric humans from Australia, and follows the development of society and technology on the southernmost continent. And a truly bizarre and often horrifying civilization it is...

if you're a member of AlternateHistory.com and here

if you are not. Its overview on the AH.com wiki can be found here

(currently, it is still under construction, but should be finished soon).