Cyberpunk ASMR is a series created by YouTube user EpicASMR, immersing the viewer in a cyberpunk future. 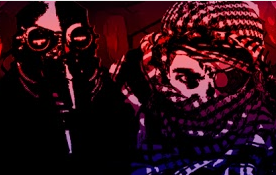