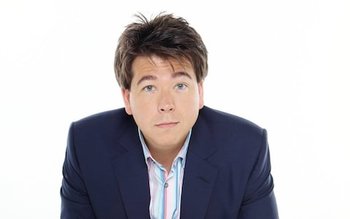 Michael Hazen James McIntyre (born 21 February 1976) is a hyperactive British standup comic focusing on observational humour. Also a frequent guest on Panel Games. He is known for being subject to a dissonance between being popular in the general public but hated by many critics for being 'too conventional' or 'too safe'. His best known routines are probably the "Man Drawer

", that time when the dentist couldn't get his tooth out

, his claim that skipping while swinging your arms

gives you Super Speed at the expense of looking a bit stupid, and the revelation that any word can be used by a posh person to mean drunk