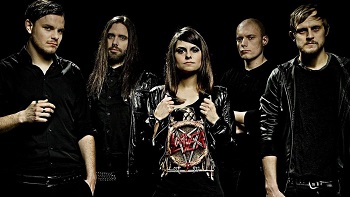 Deadlock are a German Melodic Death Metal Band. The band was formed in 1997. The band's lyrical themes are widely vegan/human rights based.

What makes Deadlock different is the combination of death growls by vocalist Johannes Prem/John Gahlert and the clean vocals of Sabine Scherer/Margi Gerlitz. Also included in their sound are techno sections, often used as intros but sometimes used as a whole breakdown section, where a complete genre change takes place

They formed in 1997 as a Hardcore Punk band with vocalist Johannes Prem, guitarist Sebastian Reichl, and drummer Tobias Graf. They released a demo in 2000, along with their debut in 2002, with Sabine Scherer as a session vocalist before joining full time in 2004, making her true debut. Their fourth album, Manifesto, was released in November 2008. (January 2009 in North America). Bassist Thomas Huschka had left the band due to personal and musical differences, being replaced by John Gahlert, who himself would be the vocalist in 2011 when Prem decided to call it quits.

in 2016, Sabine left to focus on her family. She'd been on maternity leave for the previous 18 months. Her replacement was named as Margi Gerlitz, who'd been the touring replacement during this time.

This band displays the examples of these tropes: