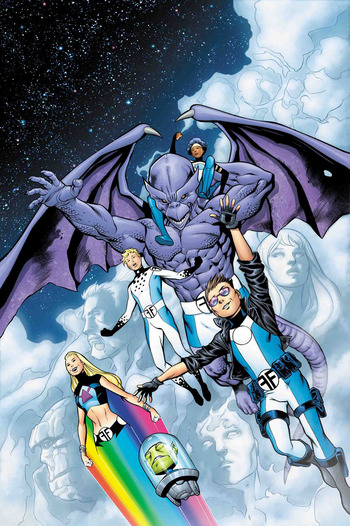 Future Foundation is a 2019 comic book series that's effectively a Spin-Off of the Fantastic Four, continuing from the pages of the title. The comic series is written by Jeremy Whitley (The Unstoppable Wasp) and drawn by Will Robson (Great Lakes Avengers, Spawn). It is the third comic starring the Future Foundation, after two FF series.

The series begins after Fantastic Four Vol. 6, where Reed, Sue, Franklin and Valeria returned to Earth and reformed the Fantastic Four. The rest stayed behind to chart the multiverse in order to rebuild their friend the Molecule Man. The Future Foundation, consisting of Alex and Julie Power, guest professor Yondu Udonta, and many others, our crew of young geniuses, mutants, Atlanteans, Moloids, androids and more, begin their multiversal quest. The first mission? A prison break!

The first issue was released on August 7, 2019. The book was cancelled after issue two, and ended on its fifth issue in December.