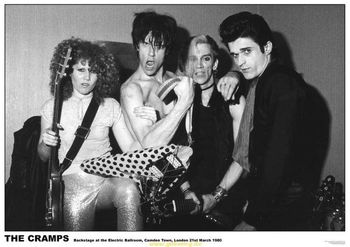 The Cramps were an American Punk Rock band from Sacramento, California, who were one of the major innovators of garage punk and psychobilly music.

The band were formed in 1976 by the Creator Couple of Lux Interior (aka Erick Purkheiser) and his wife Poison Ivy Rorshach (aka Kristy Wallace). They quickly entered the CBGB scene in New York City, dominated by bands like The Ramones. Their first LP, Songs the Lord Taught Us, is often considered their best release.

The Cramps are remembered for their amazing live shows, and their melding of punk, Garage Rock and Rockabilly with their love of B Movies, Exploitation Films and Las Vegas trash culture.

Tropes the Lord Taught Us: