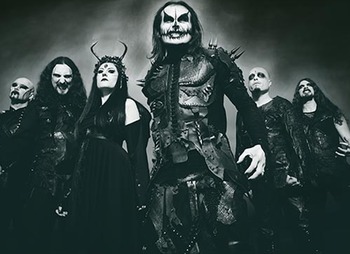 The 2016 incarnation of the band (left to right: Ashok, Daniel Firth, Lindsay Schoolcraft, Dani Filth, Marthus, Rich Shaw).
"It sounds horrible, but it's really quite beautiful!"
—Richmond Avenal, The IT Crowd, on "Coffin Fodder"
Advertisement:

Cradle of Filth is a metal band from Suffolk, England. They got their start in 1991, releasing three demos and a rehearsal tape, and completing one album, Goetia, on Tombstone Records, which had its tapes wiped when the label went out of business. Eventually, they signed to Cacaphonous and released their debut album, The Principle of Evil Made Flesh, in 1994. They have signed to several other labels since then, most recently with Napalm Records (signing in 2022). All of this has happened among rapid and frequent line-up changes, with lead singer Dani Filth being the only consistent member.

The band is probably best known for black metal fans decrying them as sellouts - the main reasons being abandoning black metal in order to move on to other metal genres, changing to a more commercial image, signing to mainstream labels (they even signed to Sony for one album), and courting mainstream publicity (hardcore black metal fans tend to frown on all of these). They still have a big fanbase, though, and, according to Metal Hammer, they're the most successful British metal band since Iron Maiden.

"Her Ghost in the Fog"

"Her Ghost in the Fog" features equal parts Black metal screeching and growling with singing maidens.

"Her Ghost in the Fog"

"Her Ghost in the Fog" features equal parts Black metal screeching and growling with singing maidens.