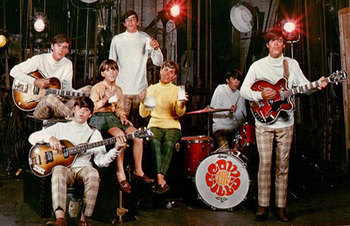 The Cowsills are an American bubblegum pop band from Newport, Rhode Island, originally active between 1965 and 1972, consisting of six siblings and their mother Barb. The band was originally formed in the spring of 1965 by Bill, Bob, and Barry. Most of the rest of the family joined over the next two years. By the time the band reached its full size in 1967, the kids ranged in age from 19 to 8. They were the inspiration for The Partridge Family, and according to some sources were originally meant to star in the show.
Advertisement:

The group debuted in 1967 with their #2 hit "The Rain, The Park & Other Things", and returned to that spot in 1969 with their cover of the title song from Hair. After the band broke up, several of the kids went on to other musical projects in the 1970s and 80s; Barry and Bill both started solo careers, Susan joined the influential college rock band The Continental Drifters, and John became the touring drummer for The Beach Boys. The band reunited in the 1990s and now tours the nostalgia circuit as the trio of Bob, Susan, and Paul.

The Cowsills provide examples of: