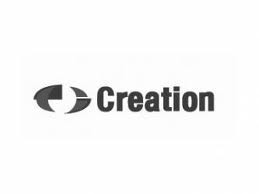 Creation Records was an independent record label from the UK, founded in 1983 and disbanded in 2000, which served as one of the key labels in the Alternative Rock scene of the UK during The '80s and The '90s.

The label was formed by Alan McGee with second-in-command Dick Green and producer Joe Foster, and named after one of McGee's favourite bands, The Creation. Its initial purpose was to serve as an outlet for like-minded musicians and bands, in opposition to the "manufactured" Synth-Pop that was so popular at the time. Funded with a £1,000 loan, the label put out its first single, "73 in 83" by The Legend! (a pseudonym for journalist Jerry "Everett True" Thackray), and soon scored a distribution deal with Rough Trade Records.

Creation established itself nearly from the start as an important label for Alternative Rock, with signings such as The Jesus and Mary Chain (who left for Warner (Bros.) Records in 1985), Primal Scream, Felt, and The Weather Prophets. After a disastrous attempt by McGee to run a Warner Bros. subsidiary named Elevation, the label regrouped in the late eighties, proceeding to swallow numerous Shoegazing bands such as My Bloody Valentine, Ride, Slowdive and Swervedriver, while keeping Primal Scream aboard and signing Teenage Fanclub and The Boo Radleys.

Thanks to this roster and McGee's media talent, Creation Records became one of the most critically acclaimed labels in the UK. Unfortunately, all the raves their releases earned only translated into at best mediocre commercial success. Already burdened with debts and McGee's drug abuse, one band was famously blamed for driving the final nail into the label's coffin: My Bloody Valentine and their costly two-year recording of Loveless. While they've always denied spending £250,000 on their Troubled Production, the label was in such dire straits by now that McGee was forced to sell half the company to Sony Music Entertainment. While Sony's tenure led to the signing of Oasis and subsequent success, McGee has always claimed that the sale ended "the real Creation" by bringing in major-label accountants and marketing managers.

The label's dissolution was announced in late 1999, and its last release was Primal Scream's XTRMNTR. McGee moved on to his next label Poptones (which popularised The Hives but also folded in 2007), while Foster continued to focus on Rev-Ola Records. A documentary about the label, Upside Down, premiered in October 2010.