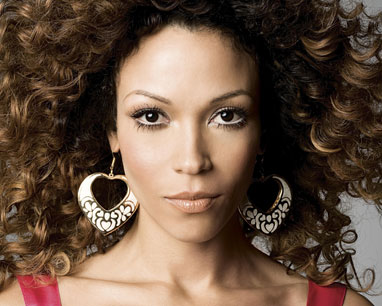 Imani Francesca Coppola (born April 6, 1978) is a musician from New York City, known for playing multiple instruments (her albums credit her for guitars, keyboards and violins) and switching between normal singing and rapping. Her style can basically be summed up as Neoclassical Punk Zydeco Rockabilly or Genre Roulette: a combination of Hip-Hop, Alternative Rock, Pop, Funk/Soul and whatever else is handy, while largely falling under the umbrella of "alternative". Basically, think The Beastie Boys crossed with The White Album.

She gained some fame thanks to her critically acclaimed 1997 debut Chupacabra, which spawned the hit "Legend of a Cowgirl", giving her the status of One-Hit Wonder. However, Executive Meddling on the part of Columbia Records ensued, her second album was shelved and she was dropped. She spent a long time out of the mainstream afterwards, self-releasing various albums that can be pretty hard to get a hang of.

Coppola began regaining attention in 2006 by touring with Mike Patton's side project Peeping Tom, who picked her up for his label Ipecac Recordings and put out The Black and White Album. She's since started an R&B duo with Adam Pallin called Little Jackie, who had another hit single in 2008 with "The World Should Revolve Around Me". Let's hope this won't end up a One-Hit Wonder as well.

She has released the following albums: