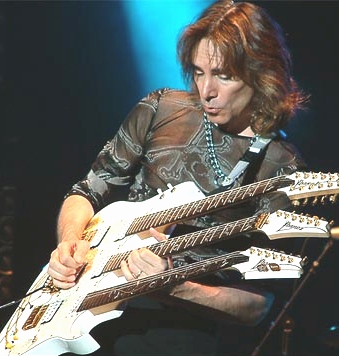 Yes, that is a three necked guitar. No, it's not just for show.
Influences:
"I loved the guitar, and I had all of this music in my head. My passion for the guitar and the ideas for what I could create musically were equal. So that's where I was."
Advertisement:

Steven Siro Vai (born June 6, 1960) is, like his mentor, Joe Satriani, an instrumental rock and Progressive Rock guitarist from New York City. His first major claim to fame was playing for and transcribing songs for Frank Zappa, but he has an extensive solo discography that takes many cues from both Zappa and Satriani.

In the 1970s, Vai took some guitar lessons from Joe Satriani, played in some local bands and followed up on his lessons by attending the Berklee College of Music. In 1979, he sent Frank Zappa a transcription of Zappa's drum instrumental, "The Black Page," from Zappa in New York and a tape of some of his guitar playing. Zappa was so impressed by this, that he hired Vai on to transcribe many of his guitar solos. Not long after this, he was promoted to full band member status. Zappa actually felt that Vai was so good that he called him "his little Italian virtuoso" and would credit him as performing "stunt guitar" or "impossible guitar parts." Part of this was because Vai would encourage audience members to bring in musical scores to see if he could sight read them. Of course, all good things must come to an end and he left Frank Zappa in 1982 to focus on a solo career.

Although, since 1984, his solo career has been his main focus, Vai has contributed to other acts, including Ozzy Osbourne, Whitesnake, Motörhead, Alcatrazz and David Lee Roth. His Signature Song is "For The Love Of God".

More currently, Vai contributed to the Halo 2 soundtrack with a rock version of the game's main theme. This version of the theme was included as downloadable content on the Xbox 360 version of Guitar Hero III. Even more recently, a few of his songs have been featured on the Rock Band Network. He is also known for the extra introductory solo on the Bill & Ted version of KISS's "God Gave Rock and Roll to You II", and well as the music battle with Ralph Macchio in Crossroads.

Appearances on other musicians' albums:

This guitarist may exhibit the following tropes: