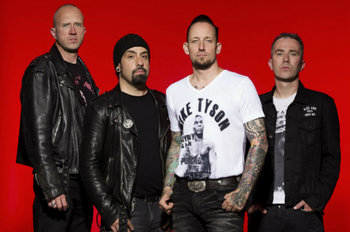 Volbeat (not to be confused with the Pokémon of the same name) is a popular metal band from Copenhagen, Denmark. Their name is a pormanteau of the words "volume" and "beat", both commonly used musical terms. They were formed in 2001 by former death metal singer Michael Poulsen. Fed up with his genre, he and a few former members of his band Dominus decided to create another musical ensemble. And thus, Volbeat was born. They have a very basic beginning, but Volbeat are not your typical modern metal band.
Advertisement:

Since they emerged with their debut album The Strength/The Sound/The Songs in 2005, they have become acclaimed by both metalheads and mainstream music critics for their highly eclectic, inimitable sound, which is not only unusual, but odd even for Genre-Busting. Their music can best be described as Groove Metal with clean vocals only, with influences from Hard Rock, Rockabilly, Hardcore Punk, Rock & Roll, Alternative Rock, Country Music, and even Schlager. Yes, Schlager, as in German-styled pop music. To call them unique would be an understatement. But they still have managed to gain a large fanbase from all sorts of crowds, have had their songs played on contemporary hard rock radio stations, and haven't even managed to attract a Hatedom yet....

Wait, we're getting off track a bit.

Anyways, after winning numerous awards in their home country of Denmark for their first album, they recorded Rock the Rebel/Metal the Devil two years later in 2007, which gained them even more praise. They still hadn't quite reached their success yet. This deal was sealed with their next album Guitar Gangsters & Cadillac Blood. With this album, Volbeat went platinum in their native nation, received an "Album of the Month" award from 5 magazines, won "Best Album of 2008" from Metal Hammer Germany and Italy, and on top of all that, the album's lead single "Still Counting" reached the number one spot on the Billboard Hot Mainstream Rock Tracks List, making them one of the only metal acts ever to accomplish this feat. The metal scene began catching on to their infectious sound as well, according to their 2010 album Beyond Hell/Above Heaven, which features guest appearances from Mille Petrozza of Kreator, guitarist Michael Denner of King Diamond, and Mark "Barney" Greenway of Napalm Death. And speaking of King Diamond, Outlaw Gentlemen & Shady Ladies even features a song with the man himself.

In other words, Volbeat remains, and probably will for years to come. With 5 albums to their name in only 8 years of releasing music, acclaim by the boatload all across the globe, crossover appeal, incredibly distinct sound, and infectious melodies, they may achieve legendary status someday. Who knows?

Counting all the tropes in the room...