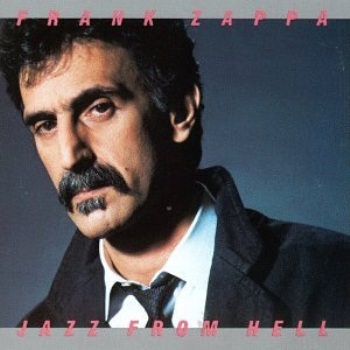 "Well, things in America can be from Hell. Right now we have a president from Hell, and the National Security Council from hell, so we should add jazz from hell also."
— Frank Zappa, interviewed at the start of his home video "Video from Hell" (1987).
Advertisement:

Jazz from Hell is a 1986 instrumental album by Frank Zappa, which won him his first Grammy Award (for "Best Rock Instrumental" via the Title Track). The album was (yet another) New Sound Album for Zappa as it was almost entirely made on the Synclavier computer, save for the one live track "St. Etienne". The album is well known for the audience favorites "Night School", "St. Etienne" and the incredibly catchy "G-Spot Tornado", which would be performed live on The Yellow Shark and is reportedly the song that Germaine Greer wants to be played at her funeral. The album is also notable for allegedly being the only Zappa record to have a Parental Advisory sticker slapped onto it, despite not featuring any lyrics whatsoever, with the title of "G-Spot Tornado" being cited as the reasoning behind the sticker's inclusion.note This is an urban legend that has never been truly verified, spread around no doubt thanks to Zappa's activism against Tipper Gore and the RIAA's censorship campaigns; however, it has been reported that the hypermarket chain Fred Meyer sold the album with their own "explicit lyrics" warning affixed to the packaging.

Jazz From Hell was the final studio album that Zappa would release in his lifetime; all later releases that he lived to see were live recordings, and his next (and last) new studio album, Civilization Phaze III, would be released nearly a year after his passingnote this is discounting Läther, which is technically not "new" in the sense that it was assembled during the 1970's and initially split across several other albums before finally being released in its original form in 1996.