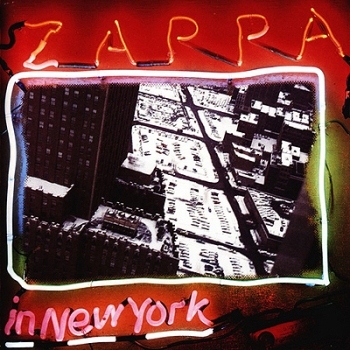 Zappa in New York is a 1978 Live Album by Frank Zappa. It is well beloved for the fan favorites "Titties & Beer", "Punky's Whips", "The Black Page" and "The Legend of the Illinois Enema Bandit". The stage show was accompanied by the Saturday Night Live band, including Lou Marini, Tom Malone, The Brecker Brothers and announcer Don Pardo.

The album was also part of significant Executive Meddling. It was released in early 1977, but quickly withdrawn on behalf of Warner Brothers' record label. They objected to the song "Punky's Whips", because it poked fun at Punky Meadows from the rock band Angel and removed it from the tracklist, along with editing "Titties & Beer", to remove a shout-out to this song. With not enough material to fill up side 1 of the double album "Big Leg Emma" was removed from side 2 to the end of side 1. So 1977 became the only year where no official Zappa albums were released, as "Zappa In New York" was eventually released in its edited version in 1978. All these decisions were made without Zappa's permission and he sued for contract violation, resulting in a long trial against his label and his former manager, Herb Cohen. This lead to a problematic situation where Zappa's production was put on hold. The only way he could make money during this period was by touring, so he continued doing this. Meanwhile new Zappa albums were released: Studio Tan (1978), Sleep Dirt (1978) and Orchestral Favorites (1979), but again without Zappa's permission and without the profits going to his own pocket. Eventually Warner Bros. lost and Zappa became owner of his entire catalogue.

The CD release restored the album according to Zappa's original intentions, with all the songs unedited and additional live bonus tracks: "Cruisin' For Burgers", "I'm The Slime", "Pound For A Brown On The Bus" and "The Torture Never Stops". The tracklist for that version is listed here.