Music / You Are What You Is 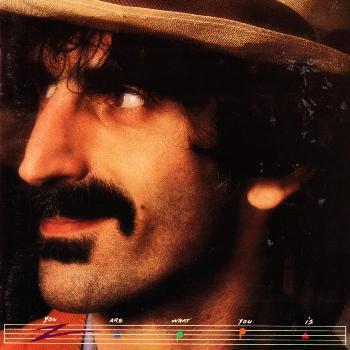 Do you know what you are?
You Are What You Is is a 1981 album by Frank Zappa. On this Concept Album Zappa returned to political and satirical protest songs which targeted the American government, Christian fundamentalism, the Moral Majority, yuppies and the reinstatement of the draft. You Are What You Is was for many years dismissed along with most of his 80s work, though in recent years it has risen in stature, with more than a few fans feeling it's his last good/great rock album. In particular, "Doreen", "Goblin Girl", "Sinister Footwear", "You Are What You Is", "The Meek Shall Inherit Nothing", "Dumb All Over", "Heavenly Bank Account", "Suicide Chump" and "Drafted Again" have become fan favorites.
Advertisement:

The Title Track was made into a music video in 1984, the first and only time Zappa made one (other songs of his had music videos, but these were either performance recordings or animations made without Zappa's involvement). It didn't receive much airplay, mostly because it featured a lookalike of Ronald Reagan seated on an electric chair and an unidentified vocalist (via overdubbing) using the N-word. The most exposure the video got in the US was on Beavis and Butt-Head, and even then it only appeared by Zappa's own request and occurred after his death.

Note: CD releases are on a single disc

Are you shot in the trope hole?