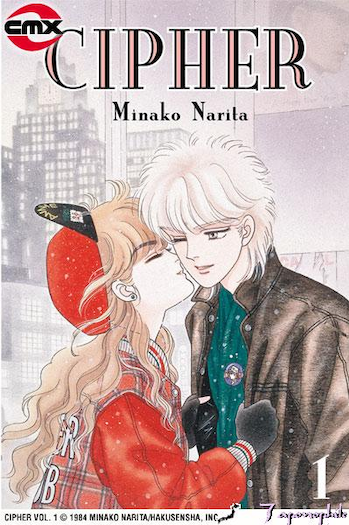 Cipher is a Shoujo manga written and drawn by Minako Narita. It ran from 1984 to 1990 in LaLa.

Set in New York City, the story concerns Anise Murphy, a high schooler who is fascinated with her classmate Siva (real name Jake Rang), a beautiful boy who works as an actor and model and has a reputation for being unapproachable. Anise takes a chance and declares to Siva that she wants to be friends with him, which he accepts, much to her joy. Shortly after, however, she discovers that he has a twin brother called Cipher (real name Roy Rang) and that the two lead a life of switching places for their convenience. The twins challenge Anise to figure out who is who within two weeks, and she moves in with them to better study them. If she can figure it out, they'll reveal to her why they constantly switch places.

There is a 1989 OVA by Magic Bus based on the manga called Cipher the Video. Rather than a straight attempt at an adaptation, it's a rather unorthodox piece of animation consisting of several disparate scenes set to popular American music of the time such as Phil Collins and Kenny Loggins. For authenticity reasons, it's also dubbed entirely in English by (non-professional) native speakers instead of Japanese.