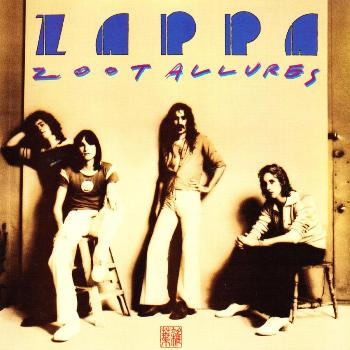 Zoot Allures is a 1976 album by Frank Zappa. Released during the height of a fierce legal battle with former manager Herb Cohen, it's notable for being Zappa's only official release on Warner (Bros.) Records. The lawsuit with Cohen placed a temporary freeze on Zappa's contract with DiscReet Records, and to get around this, his recording contract was briefly shifted directly to Warner themselves, who were DiscReet's main distributors. The end result is probably one of the most mutually cooperative efforts between Zappa and Warner since Apostrophe (').

The album was initially envisioned as a double-LP, only to be cut down to a single record by Zappa himself as production went on; some of these axed songs, featured on a test pressing of the double-LP draft, would eventually make their way onto Sleep Dirt and Läther, while the final single-record album would add in "Wind Up Workin' in a Gas Station" and the Title Track. Zoot Allures is best known for his audience favorites "Black Napkins," "The Torture Never Stops," "Wonderful Wino," "Disco Boy" and "Zoot Allures," which became staples of his concerts for years to come.