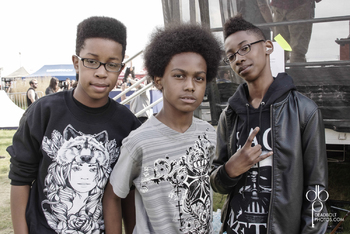 Jarad, Malcolm, and Alec
Influences:
Unlocking the Truth is a Heavy Metal band from Brooklyn, New York City. They're known for their Improbable Age — they started the band when they were barely 7 and 8, and released their debut album at 14 and 15. They've gotten off to a steady start over the years by playing at various shows and events, including Coachella (notably holding the record for being the youngest act to preform at the festival), Heavy Montreal, and Bonnaroo. Additionally, they've supported acts such as Motörhead, Marilyn Manson, Guns N' Roses, Queens of the Stone Age, and Living Colour.
Advertisement:

Their music is a mix of various retro styles, all seamlessly blended together. This includes traditional Heavy Metal, Speed Metal, Thrash Metal, and (of all things) Nu Metal. The combination actually works, and have gained a following from all camps.