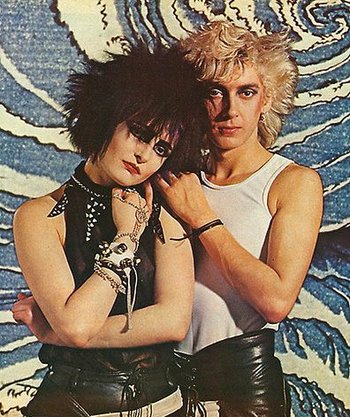 Siouxsie Sioux (left) and Budgie (right)
Standing there
Across the thoroughfare
They stand and stare
With that gormless air
So funny to see how dumb some grown men can be
— "Standing There"
Advertisement:

The Creatures were an English band formed in 1981 by vocalist Siouxsie Sioux and drummer Budgie of the seminal Post-Punk group Siouxsie and the Banshees. While rehearsing for the Banshees' Juju album, they discovered by accident that the combination of just voice and drums suited a track that would later be included on their debut EP Wild Things titled after a cover of The Troggs song of the same name. It would be two more years until they released Feast, an exotica album sonically inspired Native Hawaiian music. It would fair well critically and set something of a standard for their future releases, however, due to obligations to the Banshees, they would not come back together for another record for another six years, with their sophomore record, Boomerang. After that the group would take yet another hiatus to focus on work with the Banshees.

It would take them nine more years to record the EP Eraser Cut, a development somewhat foreshadowed by their previous collaboration with John Cale after the Banshees disbandment around the same time period. After that, it would be just under a decade they released their third record, Anima Animus, which departed from the exotica sound for a Trip Hop style. They would perform live for the next few years before going quiet again and coming back with their final record Hái! in 2004, which ended the band's tenure with a quiet bombast as they disbanded in 2005.