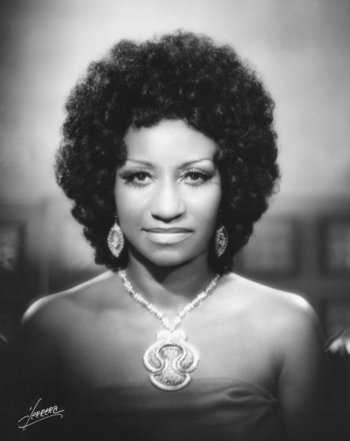 Úrsula Hilaria Celia de la Caridad Cruz Alfonso (October 21, 1925 – July 16, 2003) is a famous Cuban singer. Dubbed "La Guarachera de Cuba", "The Queen of Salsa", and "The Queen of Latin Music", Celia Cruz was the most popular Latin artist of the 20th century. She was also known as a symbol for Cuban-American exiles.

Born to a railroad stoker and a homemaker in Havana, Cuba in October 1925, Celia was the second of four kids. Growing up she praticed Santería and Yoruba songs against her father's wishes. As a teenager Celia sung in cabarets with her cousin and aunts, however she decided to follow her father's advice and become a teacher. After one of her teacher's encouraged her to get into music she began studying music theory. Soon later she began singing on local radio stations and by 1948 she was recording her first songs.

In 1950 when Myrta Silva went back to Puerto Rico, leaving an opening in her band, Sonora Matancera, Celia Cruz took her place. Celia soon become more popular than the band. She soon began touring around Latin America. When Fidel Castro assumed control of Cuba in 1959, Celia and her husband were banned from Cuba. As a result they became American citizens in 1961. In 1966, Celia met Tito Puente, with whom she would later sing many songs. Throughout the 1970s and 1980s Celia Cruz's international popularity began to grow to the point where she was well-known even outside of Spanish-speaking areas. Celia Cruz sang well into her 70s and was still singing prior to her death from brain cancer.

Well-known for her flamboyant outfits, loud personality, and unique singing voice, Celia Cruz was most well known for being a guaracha and salsa singer. She dominated the genres at a time when they were male-dominated. She had twenty-three gold albums and received many Grammy's and awards over her career.