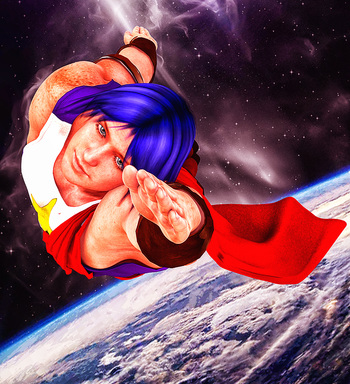 Serving the Universe... with a Smile!
Advertisement:

Servant is a Superhero Comic Book produced in the Philippines. Created by Geoffrey Borgonia in 1997 and has had releases in 2003 as a mini-comic, 2008 as full comic book, and the latest being a digital comic in 2012, it follows the stories and adventures of a college student/call center agent/ pagan god/ superhero by the name of Gal Ang/Gabriel Barreon.

On the surface, Servant is a Superman analogue. However, there are also familiar elements that can be found in the origins and backgrounds of other comic book characters such as Spider-Man, The Mighty Thor, Shazam!, as well as other traditional legends and myths like King Arthur, The Epic of Gilgamesh, and Hercules, and even more recent works such as The Lord of the Rings and Star Wars. What makes the comic book unique is the exploration of the largely untapped Philippine culture and setting.