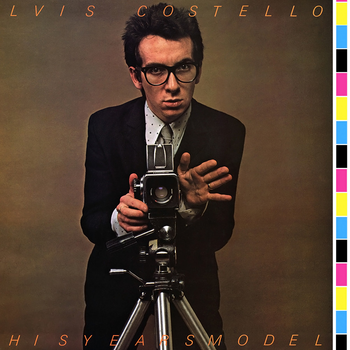 The original British cover, featuring a deliberate printing mistake.
You say you're sorry for the things that you have done
You say you're sorry but you know you don't mean it
I wouldn't worry, I had so much fun
Sometimes I almost feel just like a human being
—"Lipstick Vogue"
Advertisement:

This Year's Model is Elvis Costello's second studio album. It is also his first with the Attractions, the crack backing band he'd recruited to tour with his previous album, My Aim Is True. It was originally released in March 1978 on Radar Records in England and Columbia Records in America.

The original US release dropped "Chelsea" and "Night Rally" because Columbia executives thought their lyrics were "too British". They were replaced by "Radio Radio", a song already (in)famous for getting Costello banned from Saturday Night Live. Most CD releases include both songs, either on the primary disc or a bonus disc.