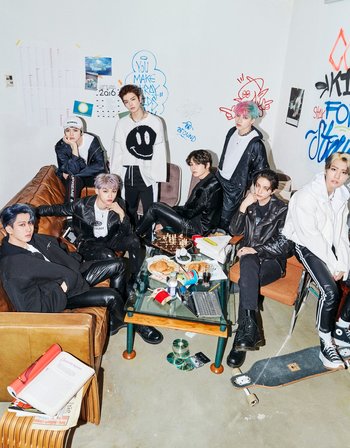 Stray Kids (Korean: 스트레이 키즈), SKZ for short, is an eight-member South-Korean boy band that debuted on March 25, 2018 under JYP Entertainment with the song "District 9." Unlike other JYPE groups, Stray Kids was not formed by the company and instead was put together by their leader, Bang Chan.

While their main influences lie in hip-hop, their work is also heavily influenced by various offshoots of electronic music and any other genres that may catch their fancy. Their lyricism primarily draws upon personal experiences and feelings, with recurring themes of youth and the place of the young within society, and often delving into topics such as coming-of-age, mental health, alienation, expectations pushed upon young people and various social disparities.

Previously, the group had nine members, but on October 28, 2019, member Woojin was removed from the group for undisclosed reasons.

The group as a whole also puts out additional solo/subunit work under two series on their YouTube channel - SKZ-PLAYERnote solo songs written and performed by individual members/subunits, original choreography to other music and SKZ-RECORD.note song covers, more informal experiments and original music