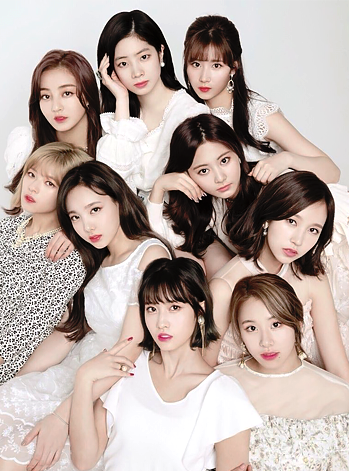 TWICE (Hangul: 트와이스) is a South Korean Girl Group formed by JYP Entertainment in 2015. They debuted through the reality show Sixteen, where sixteen girls competed against each other to decide who would be the ones to debut in a long-planned project of the agency. Eventually, nine winners – seven who won outright, plus one each based on audience votes and JYP's personal recommendation – were chosen and became members of the group. Of the members, five of them are Korean (Nayeon, Jeongyeon, Jihyo, Dahyun, and Chaeyoung), three are Japanese (Momo, Sana, Mina) and one is Taiwanese (Tzuyu).

The group debuted on October 20th 2015 with the EP The Story Begins and it was a massive success. The title track "Like Ooh-Ahh" broke records for K-pop debuts, and the girls landed numerous endorsements, claimed to be enough to maintain JYPE as a company for 10 years. Record-breaking trends continued with their second EP Page Two, which also landed the group their first music show wins.

During promotion of Page Two, Taiwanese member Tzuyu was caught in a political proxy war between China and Taiwan which made international news. She got backlash for waving Taiwan's flag in a Korean TV show*  (provided by a staff member to promote Korean-Taiwanese friendship), forcing her to make a video apology.

Reactions to this were extreme, from likely influencing the Taiwanese elections already scheduled for that period in favor of the pro-independence party*  (that party, the DPP, was set to win anyway, but the mistreatment of Tzuyu by JYPE at the behest of China is believed by political scientists to have had an effect on over a million young Taiwanese voters), to the Chinese government censoring searches for the controversy in order to defend her.

In June 2017, Twice officially debuted in Japan, with their first Japanese-language EP #TWICE – adaptations of their first 5 Korean title songs (coupled with the Korean originals) – being certified Platinum, and made their first live appearance in Tokyo that July. They later followed this up with Japan-only singles and albums, technically also making them a J-Pop group. To date, they only perform their Japanese songs in Japan. Everywhere else gets their Korean catalog (which includes a few adaptataions of originally Japanese songs like "BDZ" and "Be As One").

, the title once held by Girls' Generation. Less controversially, Twice is the best selling current girl group in Kpop, with not only mega-hit singles but also selling more albums than every other girl group in Kpop combined in 2017.

Twice made their first international appearance at KCON-LA in July 2016, along with several other groups including BTS and Girls' Generation.*  Twice would also appear at KCON in 2017 and 2018; they missed 2019 due to being on tour in Japan at the time. They embarked upon their first international headline tour in early 2017. Twicelights, their 3rd international tour, included their first headline shows in the West (specifically the USA and Mexico City). Their 4th tour, III, began in earnest in February 2022 with seven shows across the USA and then three shows at Tokyo Dome, all of which sold out within minutes. These shows marked the first time in almost three years all nine members performed together in front of a live audience. That was followed by two more sold-out "Encore" shows at the Banc of California Stadium in Los Angeles – the first time any Korean Girl Group had played, much less sold out, a stadium show in the USA. A couple days later, they performed on The Late Show with Stephen Colbert, marking their first in-person appearance on an American TV show (earlier performances were remote due to the pandemic).

In May 2022, JYPE, through Twice's social media channels, announced they would release Nayeon's first solo EP – a Self-Titled Album – the next month, marking the first commercial solo music release for any of the members. On July 12th 2022, JYPE formally announced that all nine members had renewed their contracts, making Twice the agency's first girl-group to break the so-called "seven-year-curse", and one of the very few Korean groups to do so without losing or replacing any members.note  The only other JYPE group to break the curse is Boy Band 2PM but they lost a member early on. Got7 doesn't count due to leaving JYPE once their contracts expired and then re-forming as an independent group. BTS and Red Velvet are the other major groups to have gone over seven years at the same company without any lineup change. As of this edit, Blackpink has yet to hit the seven-year mark as they did not debut until mid-2016.

Two members thus far have had to go on hiatus at separate times for mental and/or physical issues – Mina in 2019, followed by Jeongyeon from 2020-2021. Unusually for K-Pop, fans (especially outside Korea) have been very accepting of this and appreciative of the girls being candid about their issues.

English Singles (all digital only)