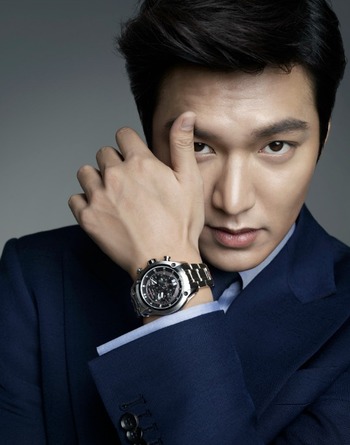 Lee Min-ho (born June 22, 1987 in Seoul, South Korea) is one of the most famous Koreans in the acting and modeling industry. After earning a breakthrough in his career with the popular Korean drama Boys Before Flowers, Min-ho has become a popular male lead. He's prominently known for his roles as the stereotypical rich kid, but he can also be a bad-ass action star, the leader of the royal guard, and even a closeted gay man. In 2020, he played, rather logically perhaps given his popularity, the Monarch of an alternate Korea.

He has also debuted as a singer after singing the track My Everything from the Boys Before Flowers soundtrack. Since then, he has released two albums.

He also has active social contributions, such as being the Honorary Ambassador for UNICEF's Love Net campaign to fight malaria (2009–2010) and being PR Ambassadors for Korean Tourism Campaign (2015), Visit Korea Year 2016–2018 (November 7, 2015), and many more.

Though a lot of fans ship Lee Min-ho with Boys Before Flowers leading lady Geum Jan-di or The Heirs leading lady Park Shin-hye, he started dating his City Hunter co-star Park Min-young. After a few months, they ended their relationship. In March 2015, it was confirmed that he and singer Suzy are in a relationship.