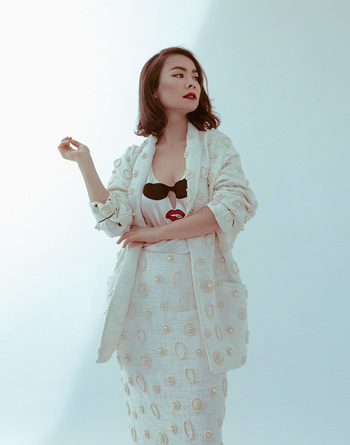 Your best American girl.note Photo by Savanna Ruedy for Pitchfork

.
I don't need the world to see
That I've been the best I can be
But I don't think I could stand to be
Where you don't see me.
"Francis Forever"
Advertisement:

Mitski Miyakawi, mononymously known as Mitski (born on September 27, 1990), is an American indie rock singer-songwriter. Born in Tokyo from an American father and a Japanese mother, she grew up moving from country to country before eventually settling in New York in order to attend college. She decided to pursue a musical career and enrolled in the SUNY Purchase College, where she created her self-released first two albums, Lush and Retired from Sad, New Career in Business, as her ambitious junior and senior school projects. In them, she exhibited a classical sound, with ample use of piano melodies and even a 60-piece student orchestra.

Exhausted from the experience (and from working outside jobs to support her financially), Mitski had a brief stint as vocalist of a prog-metal band before starting to work on her third album. Switching to a rawer, guitar-driven sound, Bury Me at Makeout Creek was recorded in makeshift studios in friends' homes and was her label debut. After its release in 2014, Bury Me at Makeout Creek received critical acclaim, a feat repeated two years later with Puberty 2. Mitski ended up opening for Lorde, and "Francis Forever" was Covered Up by Olivia Olson (as Marceline) in an episode of Adventure Time.

Mitski released her fifth album Be the Cowboy in 2018, which brought back orchestral elements alongside her now-signature guitar. Unsurprisingly, she was once again lauded by critics, with the album being named best of the year by none other than Vulture, Pitchfork and Consequence of Sound.

I'm just asking for the tropes, give me some good honest tropes: