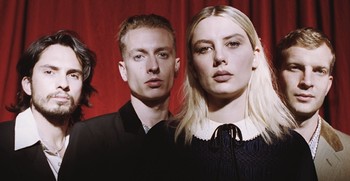 Wolf Alice is a British grungy-alternative-indie-pop-rock shoegaze-ridden-punk band fronted by Ellie Rowsell, with guitarist and backup vocalist Joff Oddie (the other member of the original duo in their earliest days), bassist Theo Ellis and drummer Joel Amey.

Originating in North London in 2010, the band was originally the acoustic duo of Rowsell and Oddie, who named themselves after a story by Angela Carter. After deciding to add electric elements to their sound, they added two new members: Rowsell's friend Sadie Cleary, on bass, and Oddie's friend George Bartlett, on drums. They self-released their first EP, Wolf Alice, in 2010. In 2012, Bartlett broke his wrist and was temporarily replaced by Joel Amey, who eventually joined the band permanently. Cleary left to focus on her studies the same year and was replaced by Theo Ellis. The band would release their first official EP, Blush, in 2013, followed by their second EP, Creature Songs, in 2014. Their first official album, My Love Is Cool, was released in 2015, with their second album, the 2018 Mercury Award-winning Visions Of A Life, released in 2017. In 2021, a new single, titled "The Last Man on Earth" was released, accompanied by the announcement of their third album Blue Weekend, due on June 11th.

Our love is tropes: