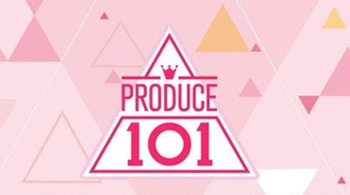 The series' logo
Produce 101 is a South Korean reality series with the goal of creating Korea's ultimate Idol Singer groups. To accomplish this, pools of 101 trainees from various agencies were gathered. The first season, which aired in 2016, was focused on creating a Girl Group, and the second season, which aired in 2017, has the same premise but with male contestants.
Advertisement:

In the first season, these contestants ran the gamut from Somi, a trainee with JYP, one of Korea's largest agencies, to a batch of independent trainees. To create the final group, I.O.I, the girls were evaluated by a panel of judges/mentors and also by the general public, whose votes would ultimately decide who was eliminated, and who debuted. The 2nd season's final group WannaOne were also made from the top 11 of various contestants, from members of the previously debuted Boy Groups such as NU'EST, Hotshots, Topdogg, etc., trainees as young as 15 years old (Korean age), until individual trainees and trainees with training period less than 6 months.

The first season season was presented by Korean celebrity Jang Keun-Suk. He was assisted by a group of five female industry experts who functioned primarily as teachers for the girls, as well as talent evaluators. They were:

The third and fourth seasons, Produce48 and Produce X 101, have their own page.

Tropes appearing in both seasons of Produce 101: