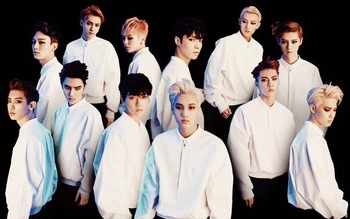 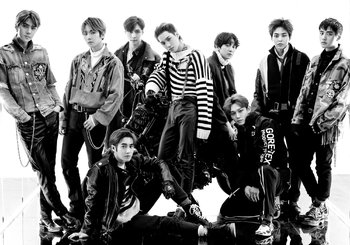 Legend dictates that twelve young men with supernatural powers hailing from another planet called the "Exoplanet" were nurturing the tree of life. However, an eye of red force created evil, so the twelve divided the tree into half and hide each side, overturning time and creating two suns that look alike into two worlds that seem alike...

Or at least, that's the concept formed for the band.

EXO (Korean: 엑소) is a South Korean-Chinese boy band who debuted under SM Entertainment on April 8, 2012, after 23 teasers. They are split into two sub-units, EXO-M and EXO-K, who promote in China and South Korea, respectively.

The group originally debuted with 8 Korean members and 4 Chinese members. Former member Kris filed a lawsuit to terminate his contract in early 2014. There was debate about the group disbanding for a while, but members have reassured their fans that they will continue on. Also, as of 10 October 2014, Lu Han has decided to terminate his contract with SM Entertainment as well. There were rumors as far back as September 2014 which said that Lu Han would be leaving due to his health and because SM would make him work despite his health, so as sad as fans were that he decided to leave EXO they were not surprised. Member Tao went on hiatus from group activities beginning April 2015, and officially departed from the group in August.

After the departure of 3 Chinese members, EXO-K and EXO-M began promoting as a single group EXO. However, due to political reasons, EXO currently promotes as 8 members, while Lay does solo activities in China. Despite this, Lay participated in the group's fifth studio album Don't Mess Up My Tempo released in 2018. On May 7, 2019, eldest member Xiumin enlisted for mandatory military service, and member D.O. has voluntarily applied for early military enlistment in July of the same year, leaving Don't Mess Up My Tempo as the last album with the participation of 9 members and Love Shot as the last album with the participation of all 8 Korean members.

The group's two albums, the 2012 debut EP MAMA and the 2013 comeback studio album XOXO, were major commercial successes, selling over 1.5 million units in total worldwide. All versions of XOXO collectively sold over one million copies, making EXO the first South Korean artists to reach that milestone in 12 years. The group was also named the Best Korean/Japanese Act at the MTV EMA Awards. Their following releases continued their trend of having strong sales, with each comeback being impressive on its own, either in terms of pre-orders, sales numbers or charting position. The Korean version of their third EP Overdose had over 660,000 pre-orders, making it the most pre-ordered Korean EP in history. It also peaked at number two on Billboard's World Albums Chart, and at number 129 on the Billboard 200, making EXO the highest-ever charting male Korean group at that time. Overdose became the best selling release of 2014 in South Korea, and was the first EP to top the yearly charts and win the Album of the Year Award at the Mnet Asian Music Awards.

In 2015, the group released a special single titled Lightsaber to promote the movie Star Wars: The Force Awakens ahead of its release in South Korea, as part of a collaboration between SM Entertainment and Walt Disney. Domestic pre-orders for third studio album Ex'Act exceeded 660,000 copies and broke the record for the highest first-week sales of a Korean album, previously set by the band's own fourth EP Sing For You.

On November 4, 2015, EXO released their Japanese debut single Love Me Right ~romantic universe~. On the day of its release, the album sold 147,000 copies and reached the top of the Oricon chart, becoming the all-time best-selling debut single in Japan by a Korean artist. On January 31, 2018, the group released its first Japanese studio album Countdown, debuting at number one on the weekly Oricon chart, selling approximately 89,000 copies. This achievement made Exo the first non-Japanese band whose debut single and debut studio album both reached number one on the weekly Oricon chart, and ten days after its release, it was certified Gold by the Recording Industry Association of Japan.

On October 31st, 2016, a sub-unit of the group debuted under the name EXO-CBX (Korean: 엑소-첸백시; EXO Chen-Baek-Xi), CBX standing for Chen, Baekhyun and Xiumin, the members composing it. Their debut EP Hey Mama! topped the Billboard World Albums chart and South Korean's Gaon album chart. On July 22, 2019, a new sub-unit EXO-SC (Korean: 세훈&찬열, EXO Sehun & Chanyeol) consisting of members Chanyeol and Sehun debuted with the EP What a life, in which the mentioned members have participated in the songwriting and lyrics composition.

In 2016, main dancer Lay debuted as a solo singer with the Chinese mini album Lose Control. The mini album stayed as number one on Billboard's China V Chart for six weeks in a row, broke the record in South Korea for the most sales by a solo artist, peaking at #1 on the Gaon Album Chart and number four on Billboard's US World Albums chart. In 2019, main vocalist Chen's first Korean solo album April, and a Flower debuted at No. 3 Billboard's World Albums, making him the highest-charting solo K-pop act since November 2018 and the first solo star to chart this high in 2019. Main vocalist Baekhyun had his solo debut in July 2019 with the mini album City Lights, making him the 5th solo artist to sell over 100,000 album copies in the past decade and breaking previous records set by EXO (placing number 1 on iTunes in 63 countries) and fellow member Lay (highest first day sales by a solo artist). In March 2020, leader Suho's debut mini album Self-Portrait topped iTunes album charts in 50 countries, notably getting 1st place in Japan, a feat which EXO as a whole has yet to achieve.

Tropes found in the variety shows:

Tropes for Travel the World on EXO's Ladder can be found on its own page. 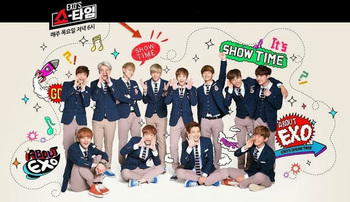 The first season of the show "Showtime", EXO's Showtime is a reality TV show that allows the fans to see behind-the-scenes of EXO's daily lives and how they act offstage. 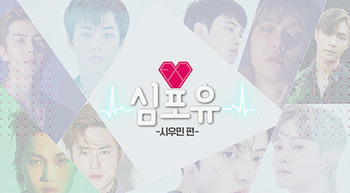 EXO's first personal reality program, Heart4U: EXO's Relay Video Records (Korean: 심포유 - EXO의 릴레이 영상 기록기'') is a reality series that closely records the daily life that each member wants to share with their fans. The first season's promotional material includes Lay in the lineup, however, he was removed in the second season onwards.

The first season follows Xiumin's daily life, including his housewarming party and trips with friends, filmed before his enlistment in the Korean military. Besides the EXO members, his non-celebrity friends are featured in the show.

Xiumin passes the baton to the next member, who he chose because said member appeared at the Heart4U filming afterparty. The second season is Chen's national busking tour before the release of his second mini album Dear my dear. Many Korean singers are featured as his guests as he travels to Busan, Gwangju, Daejeon, and Seoul.

For some reason, Chen doesn't pass the baton to the next member, and Suho introduces himself as the third member to participate in the series. The season shows Suho's preparations for his first solo album Self-Portrait and moments spent with the other members (and their manager), also before his mandatory enlistment.