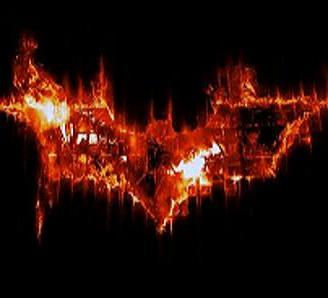 Um, that looks cool and everything, Batman... but it might not have been a good idea.
Advertisement:

A sub-trope of the Zorro Mark and often seen in works featuring a Super Hero, this trope occurs when a character recreates their logo or Chest Insignia using fire. Often, this is in concert with a Dynamic Entry. The Big Bad believes the hero is dead, only to see a flame spreading in the distance, eventually creating the hero's emblem just before he flies through the window. Sometimes, it is actually used at the end of a Climactic Battle where the hero sets the fire to reveal he is victorious. There are other variations but the effect is the same.

The reason for this is mostly Rule of Cool. Seeing the hero's emblem rising up in flames looks really exciting. This causes some Fridge Logic, however when the viewers wonder how and why the hero set the fire beforehand, to say nothing of the potential public safety hazard.

Not to Be Confused with Fire Emblem.