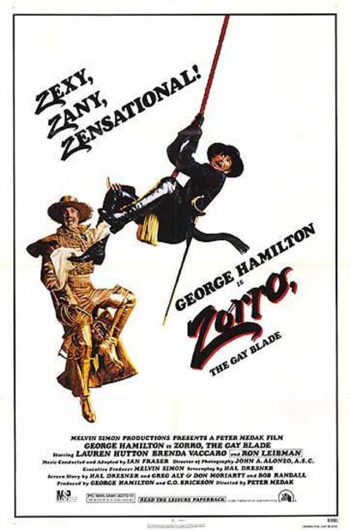 Los Angeles, California. The birthplace of... me.
My Dear Son,
I do not call you by name because I do not know which of you two brothers will be the one to read this, but whoever does inherits the greatest gifts I possess. This sword with which to fight injustice; this mask with which to deceive tyranny; and this hat which needs reblocking. Wear them with honor, for in time of need it is the destiny of the Vega men to become Zorro.
Advertisement:

Zorro, the Gay Blade is a parody of the Zorro franchise, directed by Peter Medak and starring George Hamilton as both of the original Zorro's twin sons — the flirtatious playboy Don Diego de la Vega and the Camp Gay Bunny Wigglesworth, né Ramón de la Vega.

Don Diego returns home upon the request of his father, who has tragically died. There he learns of his father's secret and takes up the mantle to be a Fighter of Tyranny and Injustice... but then he falls and injures his leg. Luckily, Ramón returns home, too, and just in time to cover.