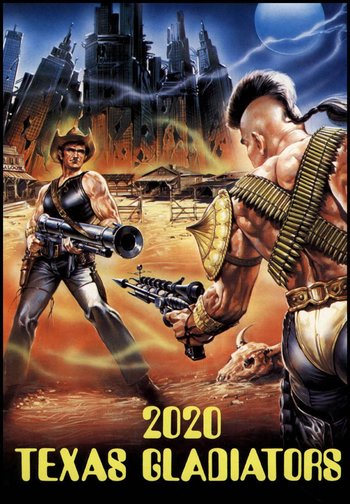 "When Earth becomes an arena... Murder becomes a way of life!"
Advertisement:

2020 Texas Gladiators is a 1982 Italian post-apocalyptic science fiction film directed by Joe D'Amato of The Blade Master and The Anthropophagus Beast infamy.

After the End, humanity has become a race of scavengers. In Texas, this is about to change due to a man setting up an industrial settlement. However, a band of fascist raiders decide to comquer the settlement for it's resources. After a former Knight Errant is killed trying to stop the takeover, his old buddies go on a Roaring Rampage of Revenge.