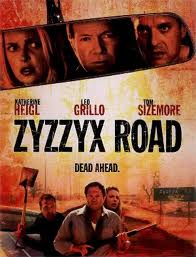 "What happens in Vegas, gets buried on Zyzzyx Road."
—Tagline for the film
Advertisement:

Zyzzyx Road is a 2006 American film written, produced and directed by John Penney. It stars Leo Grillo, Katherine Heigl, and Tom Sizemore. The film involves Grant, a philandering accountant who goes to Las Vegas on a business trip, where he encounters the seductive Marissa and her jealous ex-boyfriend Joey. The former pair kill and bury the latter along the eponymous Zzyzzx Road, a rural road off of Interstate 15 in California's Mojave Desert. However, things go From Bad to Worse when they realize Joey may not actually be dead.

It's perhaps best known for being the lowest-grossing film in US history, earning just $30 at the box-office.